Today is the 11th day of my A-Z Bible art challenge.

K is for Keturah 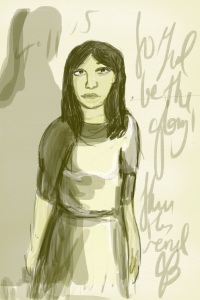 Many of you may have not known or realized that after the death of Sarah, Abraham’s wife, that he got a  second wife named Keturah.  From reading Genesis, it was known that Sarah was a beautiful woman, but was unable to bear children until her very old age. Not much is known of Keturah, but in my opinion, I think she was in the shadow of Sarah, because Sarah gave a child to Abraham in his old age that God had promised. The children of Keturah are mentioned in this chapter, and are also the children of Abraham, but their lineage is not followed. That is a study of a whole other topic.

I made Keturah young, being that she was able to bear many children for Abraham, around 5 or 6 children I believe and he died at 175 years of age. Woo! I cannot gage the sentiment of being able to bear children to an old man old enough to be your great grandfather, but I think it was nice for Keturah to bear in the riches Abraham owned and inherited, so that did not hurt. They did not have to suffer lack.

I hope you enjoyed this piece and look forward to presenting you with the letter L tomorrow on 4.14.15

For the love of God and Art!