Today is the 17th day of For a Single Purpose at 32auctions.com/jbwrshppaintings . Yes, it has been quite a ride! I have all of you to thank for making the Men in Authority series and Worship painting series a success. This following series is one of my passionate, especially since I could relate at that time….being single. Now there is nothing wrong with being Single, other than what we think; freedom, and doing whatever we want without reporting it to anyone(unless you have children), sleep late, and for many learning to be our true selves. Well to tell you the truth, not many of us know our true selves, because God is not in the picture. We all have a purpose while living on this earth and it is important that we as believers seek God to fulfill our purpose.

The overlaying theme is to basically trust God and not lean on your own understanding; Proverbs 3:5. The name of this series appropriately entitled “For a Single Purpose” is what God did in using willing vessels to accomplish His will and purpose. All of these people at the time, were single people, they were not married yet at the time God called them or are either widows or prostitutes. No matter the circumstance, God used them because they believed His Word and as a result accomplished not only fulfilled their desires but ultimately gave them a purpose and within that purpose is to glorify God. Like the Men in Authority series, the nature of this project is tripartite, meaning the same theme was completed in 3 different ways and mediums. There are 11 characters in all, most of them from the Old Testament and a few big names. However, in this auction, there are only 10 characters shown and not all of characters are shown in 3 different ways based on the voting results. As usual, I enjoyed making this series because the process made the characters alive and something we can relate to in this time of age.

Featured piece of the day…. 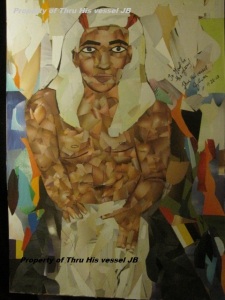 Joseph has gone through a lot. However, God was with him all of those times and look at him now, his dreams came true. After 13 years of telling his brothers his dreams, they shunned him and put him in a pit, then came being a slave, jail and then some more jail time. If Joseph was here in this day in age, it would be equivalent from him being homeless and becoming vice president of this country.  He went through a lot, but it all started with a dream.

You see people, you got to dream big and I learn from Joseph that you cannot tell people everything, even those people close to you. As long as God is in the mix, you’ll be alright. Joseph also had a active prayer life.

If you want this big piece of anointing work in your house, you got to be a bidder at 32auctions.com/jbwrshppaintings. It is unclear in the beginning,  but fill out all of the blank fields under getting an account, confirm it in your email and you are good to go. This piece sells at minimum bid of $408. If you win this piece, you will also receive a free commissioned portrait by yours truly. I will place this portrait in my 2016 art show.

Thank you for your comments and likes. Keep them coming!

For the love of God and art!