Can you believe that this challenge is almost over! I hope you have enjoyed it thus far.

X is for Xerxes the king 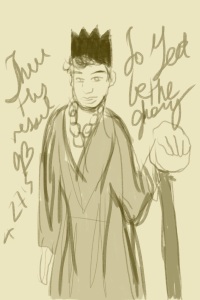 Found throughout the book of Esther also known as King Ahasuerus

Xerxes was the king of Persia that ruled the provinces from India to Ethiopia. It does not state how long he was reigning before Esther became Queen, but he was obviously a man of his word, which is hard to come by these days. He rewarded Mordecai for his bravery in stopping an assassination against him and as a result Mordecai became second in command but not right away. Overall, this King was not only kindhearted and a man of his word, but very rich and generous.

Xerxes was a great King and I would have loved it if he were a King today. However, people would probably take advantage of him and suck him dry as a politician. I have to say no one owes you anything. That’s what I got from Mordecai just helping out the King without any apparent ulterior motives. God was sure to bless him through the King. And God did not forget about you! Keep seeking Him!

For the love of God and art!