Today is the first day of the last part of the auction at 32auctions.com/jbwrshppaintings . Yes, it has been quite a ride! I have all of you to thank for making the Men in Authority series and Worship painting series a success. This following series is one of my passionate, especially since I could relate at that time….being single. Now there is nothing wrong with being Single, other than what we think; freedom, and doing whatever we want without reporting it to anyone(unless you have children), sleep late, and for many learning to be our true selves. Well to tell you the truth, not many of us know our true selves, because God is not in the picture. We all have a purpose while living on this earth and it is important that we as believers seek God to fulfill our purpose. The overlaying theme is to basically trust God and not lean on your own understanding; Proverbs 3:5. The name of this series appropriately entitled “For a Single Purpose” is what God did in using willing vessels to accomplish His will and purpose. All of these people at the time, were single people, they were not married yet at the time God called them or are either widows or prostitutes. No matter the circumstance, God used them because they believed His Word and as a result accomplished not only fulfilled their desires but ultimately gave them a purpose and within that purpose is to glorify God.

Like the Men in Authority series, the nature of this project is tripartite, meaning the same theme was completed in 3 different ways and mediums. There are 11 characters in all, most of them from the Old Testament and a few big names. However, in this auction, there are only 10 characters shown and not all of characters are shown in 3 different ways based on the voting results.  As usual, I enjoyed making this series because the process made the characters alive and something we can relate to in this time of age.

Featured work of the day…

This was almost the last piece I finished before the second phase of the series. Gideon came to  mind because at the time, God called him to be a judge of Israel, he did not feel he was qualified. He states that he is the weakest of his tribe and that Israel was in the time of turmoil. God saw that, despite Gideon’s doubts that He will be with him and would never depart from him, bringing glory to Himself and Israel. All of that was transpired throughout this work in three parts, Gideon feeling bad about himself, (Phase I) Gideon hearing from God (Phase 2) and of course the plan of defeating the Midianites with 300 people (Phase 3).

As I was doing this piece, I felt that many of us can relate when it comes to circumstances that appears to be daunting and just impossible to come to a solution, we just have to know as believers that God will always come to us, as long as we trust Him. Despite Gideon’s doubts and fears, He trusted God and saw that a solution of saving Israel from her enemies was possible.

Today and only today that this piece is available for a minimum bid of $24.00 at 32auctions.com/jbwrshppaintings. The highest bidder on this piece will receive a commissioned portrait, courtesy of Thru His vessel JB which would be placed in the 2016 art show. I thank you all for your support, time and appreciation in making this auction a success! Glory be to God!

For the love of God and Art! 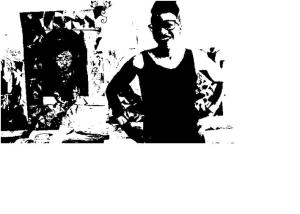